“With your hands carve out your own destiny.” – Guru Nanak Dev Ji

Guru Nanak Dev ji was the first of the ten Sikh gurus and the founder of Sikhism. His birth anniversary is observed as ‘Gurpurab’ across the globe. Guru Nanak ji travelled far and wide to spread the message of oneness and compassion.

To observe this auspicious occasion, a special assembly on Gurpurab was conducted on 7th November 2022. To begin with, the students of all classes were shown a short clip of 10 minutes on the life of Guru Nanak ji in their class itself. The assembly commenced with Guru Pheri. The joyful procession of about fifty students passed through the school corridors. The other students watched the procession in utmost faith. The hymns sung were divine and fascinating. Ahana Salwan, student of class VIII-C, explained the importance the day. Mool Mantra and Ardas were presented by Jasmeen Kaur and Ashmeet Kaur followed by the ‘Thought for the day.’ A mesmerizing Shabad Kirtan rendered by the school choir of Tagore House left the audience spell bound. Mr. Ranjeet Singh, father of Ratan Singh of class VIII-B, shed light on the significance of Gurupurab and the three teachings of Guru Nanak Dev ji.

Our respected officiating Principal Ma’am, Ms. Bhawna Puri, felicitated Mr. Ranjeet Singh Ji and addressed the gathering. She emphasized on the importance of the teachings of the great Sikh guru in the present times. She questioned the same to the students later and they readily answered her queries. To further consolidate the learning, a quiz was shared with the students in the Google classroom which they were asked to do at home. The special assembly highlights were also shared on the YouTube later.

The sacred Kadhaah Prasad, made in the school with all religious passion, was served to the students and the staff after the assembly. It was indeed a moral learning assembly for all. 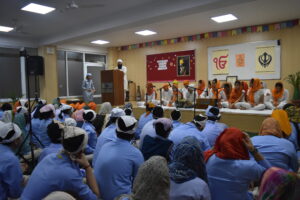 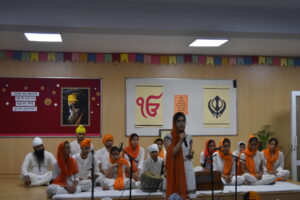 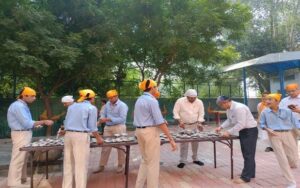