As a part of Pre-Independence Day Celebrations, to mark ‘Azadi Ka Amrit Mahotsav’ and commemorate our 75 years of Independence, Salwan Public School, Mayur Vihar organised an array of activities on 6th August’ 2022. The aim was to celebrate, relive the glorious history of our people, culture and achievements and invoke the sense of patriotism among students.

The mega day started off with a fabulous fashion show which came alive on the stage with full vigour n vivacity. The school was honoured to have Dr Nirav Patel, ACP, Madhu Vihar as the Chief Guest and Inspector Dhiraj Singh, SHO, Gazipur as the Guest of Honour. The programme commenced with welcome address followed by felicitations of revered guests with Bonsais by out respected Officiating Principal Ms Bhawna Puri. Soon after this, one could have a short glimpse of students taking part in the rally dressed as the leaders of India voicing their powerful slogans like “Tum mujhe maar sakte ho, per mere Desh ko nahin”  and “Tum mujhe khoon do, Main Tumhe azadi doonga” Then, around 15 parents and their wards making a duo, attired in the garb of great freedom fighters like Shaheed Bhagat Singh, the iron man Subhash Chandra Bose and Valiant Rani Laxmibai walked the ramp one after the other in the dresses mostly dominated by hues of tricolour. They rendered their tributes and salutations to the Mother India, to the brave heroes who had sacrificed their lives in the service of the nation. Some of them flaunted majestically in India’s multifarious traditional attires through the colourful lenses of various states.  Next, the little budding students of class V, who have contributed immensely and who have gone extra mile to help everyone around were awarded with kindness and green leader badges and certificates.  Each participant was gifted a sapling with a planter for being part of the endeavour. The programme came to an end with Chief Guest’s speech where he appreciated the efforts of school for an amazing and mesmerising show. The programme ended with vote of thanks.

Soon after the culmination of the fashion show, Jashn-e-Azadi Rally, a vibrant and a colourful one was flagged off at sharp 11a.m from the gates of school premises by our reverend Chief Guest of the day. Around 80 students along with 10 faculty members participated in the rally. The procession on tractors and trolleys, through the display of various tableaux portrayed the vast cultural ethos and the heritage of our country. The rally covered various schools in the area within 5km- range including St. Mary’s School, Ryan International, Bharti Public School and Vidya Bal Bhawan Public School. It was an initiative to bring together all communities under one umbrella of peace and harmony thus promoting brotherhood of all mankind. Children attired as freedom fighters carrying national flag remained cynosure of all eyes. The students vowed to contribute to their mite in putting the nation on the path of progress, taking inspiration from the great leaders.

Parents, educators and students of various schools gathered around the five kilometres stretch, made a human chain and cheered endlessly. They also offered sweets and posters and even sang patriotic songs on the way. Overall, it was an event worth remembering!

As a part of the campaign, a blood donation camp was also organised in the school premises from 11am to 1pm. All the preparations such as arrangement of beds, sanitation was made. A team of eight doctors and nurses led by Dr M.L. Singh from Lal Bahadur Shastri Hospital, Mayur Vihar, Phase II were there to ensure the wellbeing of the donors. Over 25 faculty members, parents and visitors came forward for the noble cause and donated blood.  All the donors were given a free medical check-up before they donated blood. It was ensured that every donor was served nutritious snacks and tea.

The grand day concluded on a humane note by gifting saplings to the blood donors. It was a beautiful gesture to recognise their noble deed. A living and breathing gift that would live for several decades and would significantly benefit the planet. It would impart an eternal inspiration for others to do the same. 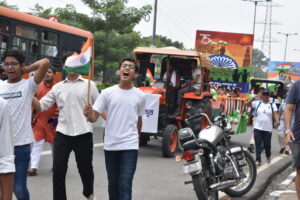 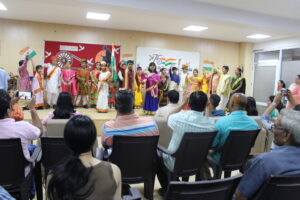 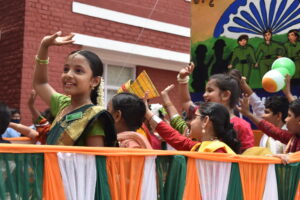 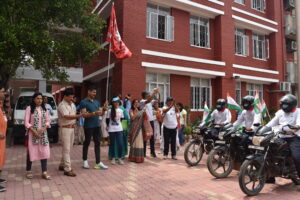 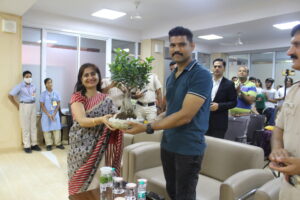 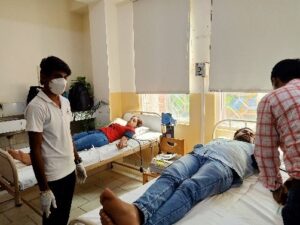 “The Weavers and Potters of Azamgarh”